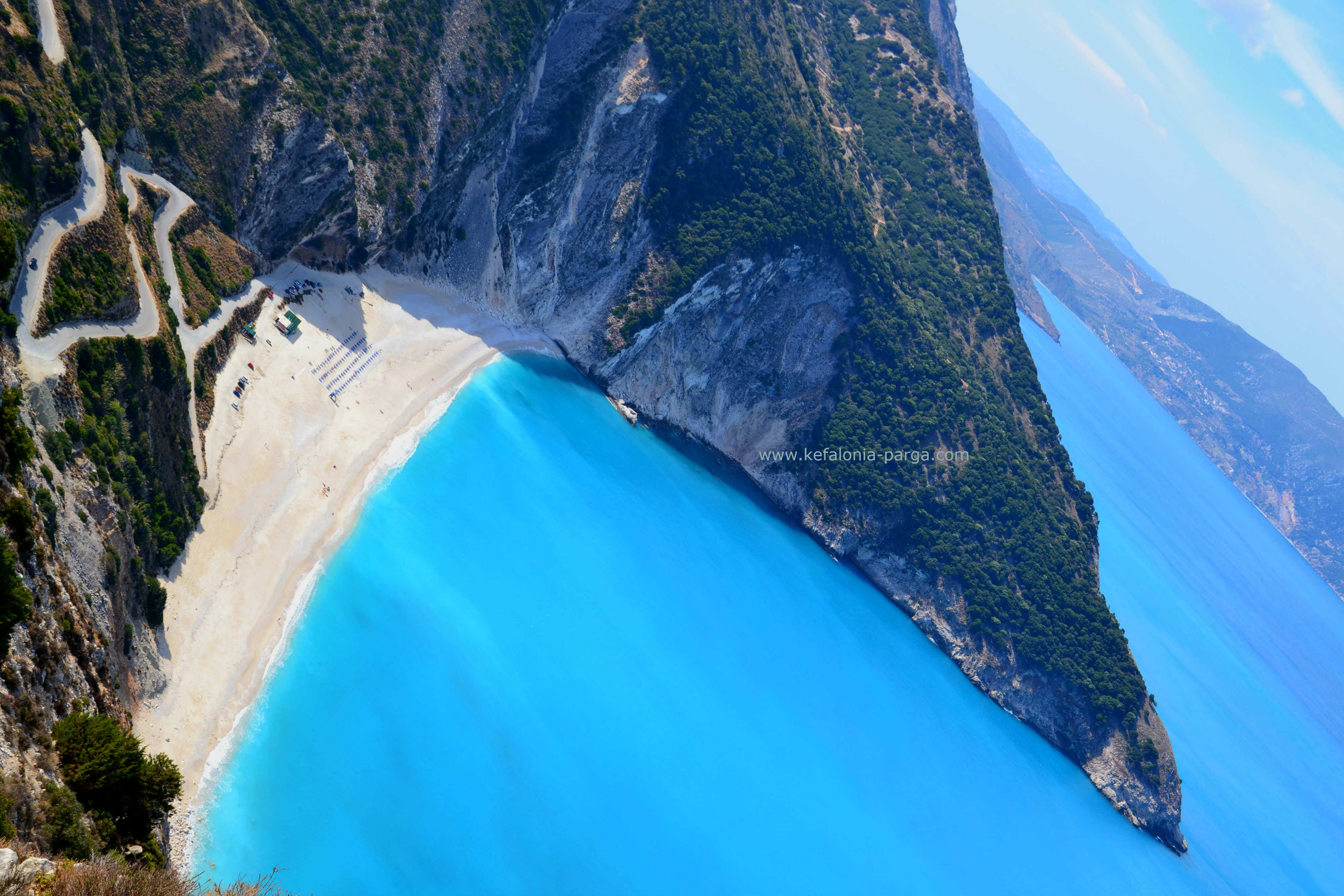 The most famous and beautiful beach of Kefalonia. Milky blue water and fine, white coquina. Greater depth is already at the shore. A steep serpentine is leading to the beach. A magnificent view of the beach panorama opens from the observation site. The beach is well equipped - there are dressing cabins, a toilet, shower, and a bar.
Myrtos beach is a business card of Kefalonia. Its pictures can be seen on the magazine covers, posters, calendars, postcards, and souvenirs.
Twenty kilometres to the south of the town of Fiscardo is Divarata, where the descent to the famous beach begins. The track at this point passes the steep hillside, quite high above the sea, opening breathtaking scenery. Just before the village, there is an observation site, from which the beach and the going-down path to it can be seen.
Believe me, it is worth stopping and admiring the view of the blue bay at a snow-white beach under the cliffs towering up! The suspension rising from the bottom leaves milky traces on the surface, adding to the range of colours and heavenly azure hues.
The road to Myrtos is very picturesque, passing through the gorge between high mountains. The serpentine road is narrow and steep, so be careful! Before the beach, get ready for one lane road and it will be stuffed with tourist cars that did not find enough parking place at the site below! The beach is equipped with cabanas and you can rent umbrellas and deck chairs, there is a bar and toilets.
When I first saw Myrtos, I was struck by its majesty and power: a huge force coming from it is felt even in calm, windless day, when the sea is smooth. Appeasement – that is probably the right word to convey my feelings, when I stretched out on the surface of the milky blue waters of the beach, quietly watching the white cliffs surrounding the bay, on which green forest was streaming down. Opacity of the water was compensated with its magical colour and grandeur of the landscape!
I was very surprised by the words of my friend, on who the handsome beach made a somewhat different impression - "predatory and dangerous", to put it mildly! However, she was so right! Myrtos really happens to be predatory, dangerous, and devious. We had a chance to watch it on a windy day, which was not felt on the shore, - the sea rippled like water in a huge bowl, rising above the surface at the edges and falling again. After some hesitation, suddenly a huge wave transhipped through the edge of the sea and took away everything that came its way, twisting down underneath as if a huge spiral! However, the sea did not seem scaring. Save God at such moment to find yourself in the water, as there is actually no chance to get ashore! We understand that the rescuers should not count - they consider their responsibilities extremely as relevant just hanging the weather flag. Therefore, we strongly recommend that under no circumstances you should go in the water in the presence of a red flag and be extremely careful if a yellow flag is hoisted!
If the weather is calm, enjoy the fantastic beauty of Myrtos for fun, take a dip in its purest curing water, and fill the view with the splendour of the surrounding nature!

Information for arrivals to Greece